If you've perused the archives, you know how this works, although I'm tweaking it a bit.  Rather than judging based on potential or overall performance, this is now a completely biased and subjective list.  This is MY top ten.  I encourage you to stop by the forums or, perhaps, write an article yourself in which you give us your own personal rankings.

Finn Balor is not included in this list and neither is Bayley.  If you're a podcast listener, you know why this is.  I enjoy Bayley's work, though the underdog gimmick is wearing a bit thin with me.  As for Balor. . . Oh, Finn, you are floundering right now.  He needs the Balor Club far more than NXT or WWE does.

Aiden English and Simon Gotch have been part of my top ten rankings since the beginning of my writing career, and that is NOT a good thing.  That means it's been almost two full years with them in NXT, and they still don't seem to be any closer to the main roster than they were previously.  While the WWE tag division could use some young blood, there are other teams who are going to get there before them.

Baron and I have a rocky history. I liked him a lot when he first made his debut but immediately realized what NXT was doing - accentuating his strengths and hiding his many weaknesses.  My enjoyment quickly turned to utter disdain for Mr. "Tall and Terrible", and it would have remained that way forever had he not told Apollo Crews (not on this list until they give him something to do besides "Smiling African American") to go back to Ring of Honor.

Since then, Corbin has found his place in the wrestling world, as the "Anti-Indie" guy, and it really works for him. Remember when we all worried about the future of the NXT women's division once Charlotte, Sasha Banks and Becky Lynch all got called up to the main roster?  How we worried that it would just be "Bayley and Friends?"  Or maybe that was just me.

Either way, NXT has a very talented crop of young female wrestlers all just waiting for their chance to shine.  I could have picked Billie Kay or Peyton Royce to take this spot, but Miss Garrett has been on TV more frequently and has impressed me each time with her in-ring chops.  I don't think she'll wind up being the female member of the Wyatt Family (as her Twitter feed creepily alluded to some months ago), but I do think she's going to have a successful career in WWE.

I debated leaving these two off of the rankings, since the writing is so evidently on the wall that they'll be joining WWE following Wrestlemania.  The only reason they stayed is because of the significant improvements they have made, both in the ring and on the mic.  I know you're saying, "DC, Enzo is a microphone maestro!", and you're not wrong.  But they didn't kick it into high gear until they got very serious with The Revival, and that's when I began taking them seriously as main roster candidates.

Here's the thing, though - Carmella needs to stay in NXT.

Unless they are going to make her solely a manager / valet, I don't think she's ready to be part of the Diva's Division.  Keep her at Full Sail for a few months, let her only be a wrestler, THEN bring her up sometime in late summer.  Sending Carmella to WWE before that only hurts her in the long run. 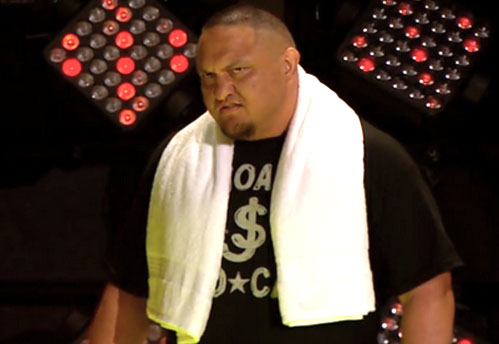 The number one contender and, seemingly, obvious next NXT champion certainly impressed with his marathon performance in that two out of three falls match against Sami Zayn (not ranked because he's already a main roster guy).  NXT would benefit from Samoa Joe being the dominant champion for much of 2016, building up new stars just by deciding to step into the ring with them.  NXT is going to need some time to get the next level of main event singles stars ready for prime time.  Joe helps with that.

The Perfect 10 is Number 5 for me, even though I know what's coming.  There's going to be a problem in NXT in the near future - With all of the new talents coming in at an almost alarming rate (How long until Bobby Roode and Eric Young sign with WWE - two weeks?  Maybe three?), guys like Dillinger, who have been in the developmental system for YEARS now, are going to get pushed back down the totem pole.

It's a shame.  This guy finally finds a gimmick that works and is likely not going to get to capitalize on it because Shinsuke Nakamura, Austin Aries (both not listed until they have their first match) and others will be in the way.  I get why it's inevitable, but I'm sad for the Perfect 10.

Hate on it all you want, folks, but these two are doing an excellent job filling the void left in the women's division. Dana Brooke and Emma weren't going to cut it as main event level heels, but between Nia's intimidating look and Eva's star power (I don't want to hear it- She is a STAR), they've made things very interesting for Bayley and friends.

Plus, they have planted the seeds for a split at some point, with Nia Jax becoming a face to replace Bayley or another female not yet mentioned who will probably be WWE bound by the end of the year.

Deal with it - Eva and Nia are great.

Dash Wilder and Scott Dawson (he's the bald one) might not be the flashiest tag team as they walk to the ring or when they pick up a mic, but between those ropes, they are everything you should like about tag team wrestling.  Go back and watch some of their matches. Notice how they actually do all of the things you're supposed to do as a tag team - Cutting the ring in half to isolate an opponent, working over a single body part, latching on to it when making a tag, to keep the fresh partner from getting involved.  Their new name is appropriate.  They could be part of a REVIVAL of tag team wrestling in WWE, and I can't wait.

I want one of their jackets personalized just for me.  Make it happen, NAIborhood!

Do I really need to say anything here?  She might not win the NXT Women's title at Takeover (Still not sure Bayley gets the call-up yet), but it's only a matter of time before she wins it.  We could see 2016 being the year that the NXT Champions (Joe and Asuka, along with whomever the tag champs might be) absolutely dominate the competition, waiting for challengers worth fighting.  I'd be very OK with this notion.

Could there have been another choice?  I don't think so.  I might take umbrage with the recent formulaic pattern of their tag matches but without question, Chad Gable and Jason Jordan are my favorite wrestlers in NXT, and among my favorites in the world right now.  Jordan's suplexes might just be better than Brock Lesnar's and truthfully, I don't think there's anything that Chad Gable can't do.

Oddly, though, I don't need them winning the tag titles at Takeover.  I want this Alpha / Revival feud to last a good long time, well into the summer.  These guys are going to set the world on fire if they get the chance, and I can't wait to see it.

So there you have it, folks, the first NXT Top Ten of the DDTpod Era.  Comment below and let me know how wrong I am.