My Turn, Doc: Why I Am Excited for Wrestlemania!

Yesterday, my esteemed partner in podcast crime Doc Manson posted an article about the reasons why he was excited for this Sunday's Wrestlemania.  Never one to shy away from borrowing a good idea, I've decided to go ahead and offer my own reasons.  In order to keep the good Doctor from screaming about plagiarism on this week's DDTpod, though, I've ranked the matches in order of my excitement AND I have included the three prospective pre-show contests.

The Usos vs. The Dudleys As I wrote on the forums last week, this has not been a pretty return to World Wrestling Entertainment for Bubba Ray and Devon, as evidenced by the fact that they are in the pre-show and nowhere near the tag team titles.  They face the main roster equivalent of Blake and Murphy (ie the Biggest Black Holes of Charisma) The Usos, so yeah. . . I'm not on the edge of my seat for this one.

Why I'm Excited: Well, I'm obviously not, though I suppose the wrestling itself will be good.  Plus, I haven't actually watched a Dudley match since they turned heel, I don't think, so that will be nice.

Kalisto vs. Ryback for the US Title 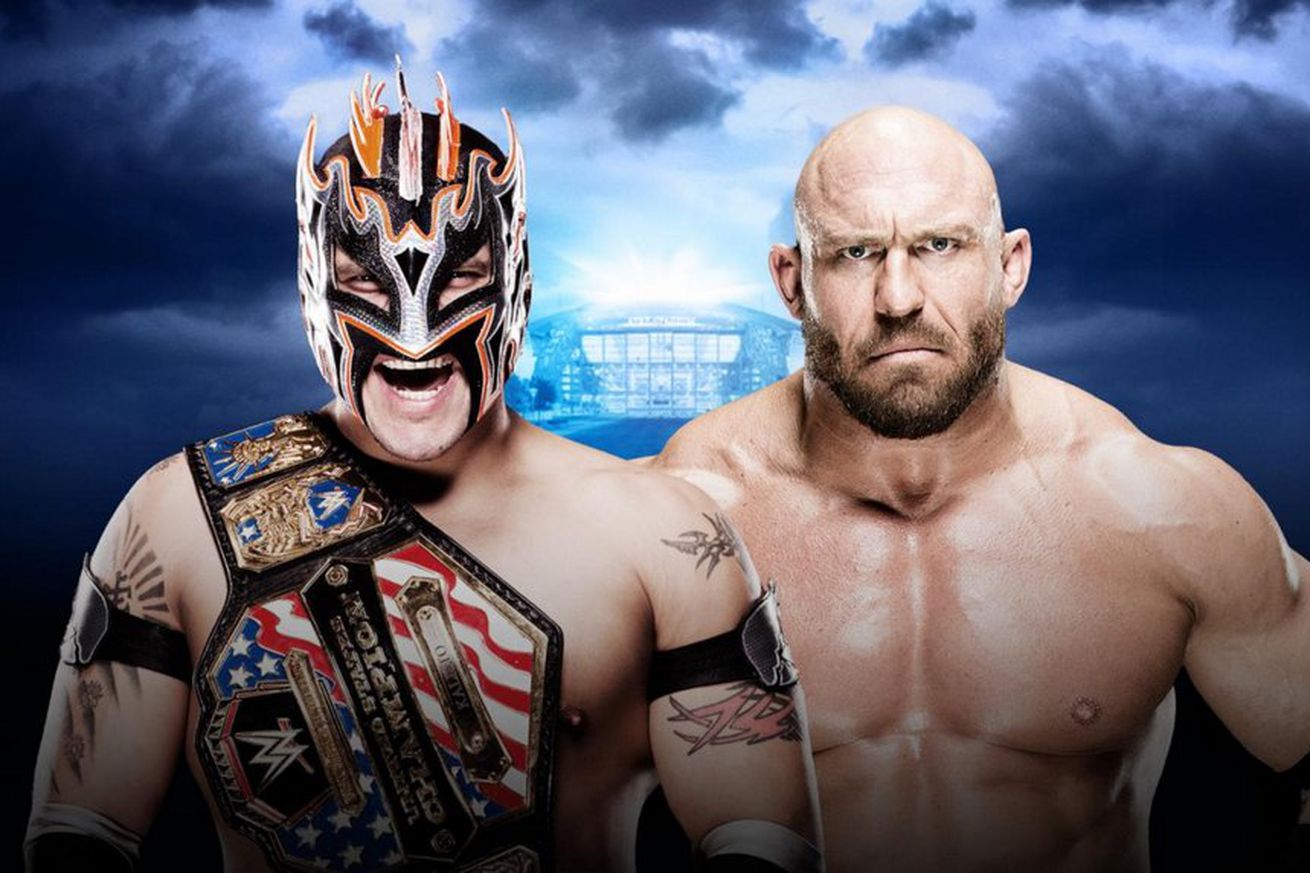 While Ryback's slightly-heelish-but-not-quite character change has been better than anything else he has done of late, I'm still not pumped for this contest.  Kalisto became as much of a household name as he currently is by doing crazy things with a ladder - Why not give him the opportunity to do so again at Wrestlemania?

Why I'm Excited: There are few wrestlers in WWE I am continually entertained by more than our United States Champion, and this particular David vs. Goliath matchup will certainly wind up in Kalisto being tossed around like a lawn dart, though it won't be as good as this was...

To be honest, I'm actually a little excited for this match.

Why I'm Excited: After all this time, we finally will get to see if Lana can be a capable wrestler.  I expect she won't get a whole lot of ringtime, hence the use of the multi-person format, but it will be more than we've seen so far.  Besides Lana, it's always nice to see Natalya wrestle and it has been so long since Paige has competed on major WWE television that I've almost forgotten what she looks like.

She's the pale one, right?

Why I'm Excited:  First and foremost, just to figure out exactly how they're going to fill the ring, what with all the talents being used elsewhere on the card.  My main reason for excitement, though, is that a large number of my favorite WWE superstars will be featured here.  Bo Dallas, Damien Sandow, Bray Wyatt (as sad as this makes me), perhaps we'll even get a look at the Ravenesque Alex Riley.  I love the lower card talents, so this match is right up my alley.

You might think it's unusual, if not plain old wrong, for me to have this match ranked fifth out of eleven, but really, this is a positive thing.  This Mania is so good from top to bottom that the World Heavyweight Championship match technically ranks in the bottom half.  How cool!

Why I'm Excited - Triple H won't be coming to the ring like a Terminator. . . I hope. . . And even if he does, this arena is indoors, right?  We're not going to make the same mistake twice, are we?

Anyway, I'm excited because I'm expecting big things from Roman Reigns on Sunday.  The last two weeks have been pretty much everything we could hope for and more and there is no reason to expect any different.  Maybe modified theme music, maybe a new outfit (Really, Roman, just ditch the vest.  Make the ladies - And some of the gents - happy!), but his evolution (HA!) concludes this Sunday.

Even when Triple H retains his title.

Full Disclosure: Don't tell him, but this match is ranked so "low" because deep down, I know Doc Manson is right, and I can't be too excited about a match where the outcome is so obvious.  Fingers crossed for some sort of swerve!

I don't understand why so many people have been lambasting this card "on paper".  Look at the talent on this show!  This is like your WWE 2K16 game come to life!  Stop riding the Negativity Narrowboat and climb on board the Paddlewheeler of Positivity - This is going to be FUN!

Why I'm Excited: It's Jericho vs. Styles, and despite the slight letdown of it being part 4 (the inner math nerd cringes when we have even numbered best-of series), this match is going to be pretty tremendous. Earlier today, I listed the "best" matches of the previous Wrestlemanias according to the ratings of Dave Meltzer and Y2J's name appears a couple of times.  While I'm not willing to do the research required, let me just go ahead and assure you that AJ Styles has had some 5 star quality matches as well.  They will not disappoint.

League of Nations vs. New Day

A lot of people were belly-aching (forgive me, NAIborhood, but it's true) about the fact that this match is no longer listed as being for the WWE tag team championships, but I don't think that's such a big deal.  For one thing, how exactly do 4 people carry 2 titles?  The Freebird Rule is soon going to be a Hall of Fame standard, so that makes sense.  There is no precedent, that I am aware of, for more than three guys holding tag team titles, unless the Villano family did some crazy stuff in Mexico.

Why I'm Excited:  This match will feature seven quality wrestlers.  All of them are enjoyable to watch, when they feel like giving it their all in some cases, but these guys are going to put on a show.  We've been pretty lucky to have some high quality tag team matches at recent PPV's (especially when you consider the relative weakness of the division) and I don't expect anything to change.

I agree with Doc that the New Day gimmick has started to. . .forgive me. . . sour a bit as of late, but unlike the esteemed Monsieur Manson, I find the League of Nations very entertaining, especially in recent weeks.  No longer tied so closely to The Authority, they can be a bunch of international hooligans, and that's A-OK with me right now.

Why I'm Excited:  The same reasons you all are - For the first time EVER, the women's title match has a really good chance to steal the show.  Along with looking up the best Wrestlemania matches this morning, I also went ahead and found  the WORST ones, too, and more often than not, the female competitors found themselves on that list.  In fact, I just went back and counted.  They showed up 11 times.  I can pretty much guarantee that won't be the case this time.

I was delighted to see Miz tweet that he wasn't injured, he was simply acting.  I don't buy it, necessarily, but at least this means he'll be competing in some form or fashion at Wrestlemania.  In truth, him being injured isn't the worst thing in the world, since Miz' entire character revolves around him trying to sneak his way to victory.  Remember when he won the IC title Battle Royal by hiding outside the ring?  Expect more of the same Sunday.

Why I'm Excited:  With the exception of Sin Cara, I enjoy all of these wrestlers, so putting them all together is never going to be a bad thing.  Would I have liked to see Owens vs. Zayn? Of course I would, but I can also understand why WWE would choose to wait for that.  You let that story build on the main roster and the payoff at Mania 33 (or 34, or 35, or 40) will be that much sweeter.

I know Sin Cara won't win the title, and I don't particularly want Dolph to win it (only because there's nothing new he can do with it) but outside of that, I am totally fine with any other competitor in this match being the one to bring down the title.  That's a very good thing.

I saw somebody tweet earlier that they were disappointed that Dean Ambrose hadn't yet shown himself to be a true challenger for Lesnar.  That's the entire point.  Nobody in WWE right now, and in fact, nobody in NXT either, SHOULD be a challenger for Brock Lesnar.  The man has been booked to exist on an entirely different plane of existence - Dean Ambrose should absolutely NOT be seen as a credible threat.

Which is why, when he wins, AND HE WILL, it will be that much sweeter.

Why I'm Excited:  The no holds barred stipulation (or whatever they're calling it - all means the same thing) is what's going to make this match fun.  Ambrose will wheel his shopping cart full of goodies down to the ring, including the chainsaw, and in between being suplexed, F-5'd and kneed right in the face, he'll use every single weapon in his arsenal to bring Brock Lesnar to his knees.

Dean Ambrose's career leaps forward on Sunday.  I can't wait to see it.

Why I'm Excited: It is rare in the wrestling business to have a match where the entire scope of the product hangs in the balance.  Yes, I know that it's a storyline, and yes, I know that the powers that be will still be when the Cell raises at the end of the night, but regardless, in 170 hours we could be looking at a completely different WWE.  How can that NOT be the most exciting part of Wrestlemania?

Shane McMahon, even at his accelerated age and with his phantom punches, is going to do a tremendous job and take a couple of risks he has no reason to take.  Undertaker, as my column earlier today showed, has done his best work in the last 10 years, so there's few worries on his end.

Bold (and probably erroneous) Statement to end the Column:  Since coming back to regular wrestling watching with the debut of the WWE Network, there has not been a main event match. . . or perhaps even a match itself. . . . I have looked forward to MORE than Shane McMahon vs. Undertaker.